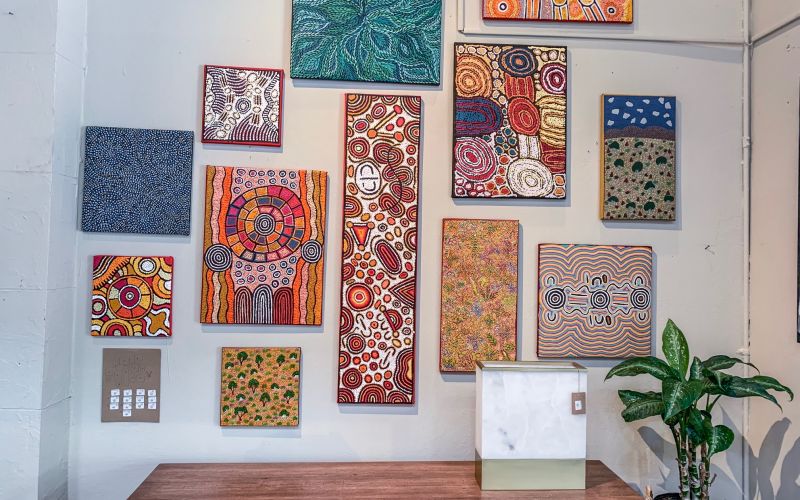 My first exposure to Aboriginal art was when I lived in Bahrain. My sister-in-law, Fatima, owns an art gallery and on two separate occasions organized a large exhibition of Aboriginal art. She would travel to Australia to personally choose and interact with the people. Besides art on canvas, she also brought painted poles which is another way they express their Dreamings.

From that time I fell in love with this art! Last November, my eldest son and I spent 25 wonderful days in Australia and New Zealand. We experienced a smattering of interesting history, beautiful nature and wildlife, warm and friendly locals, and delicious food.  Perhaps, the most captivating of the whole trip was learning about the Aboriginal culture….what it has endured, it’s relevance to Australian history and how this culture continues to maintain their way of life despite the advancement of modern civilization.

Aboriginal art dates back at least fifty thousand years, and is one of the longest continuous traditions of art in the world. It is center to Aboriginal life, and is made for political, social, utilitarian or didactic purposes (and these functions constantly overlap). Art is inherently connected to the spiritual domain, and activates the powers of ancestral beings. It expresses individual and group identity, and the relationship between people and the land. Until the arrival of Europeans in Australia in the eighteenth century, Aboriginal art was made purely to fulfill traditional cultural needs, and this has remained the case to varying degrees since.

The spiritual life of Aboriginal people centers on the Dreaming. The Dreaming is a European term used by Aborigines to describe the spiritual, natural and moral order of the cosmos. It relates to the period from the genesis of the universe to a time beyond living memory. The term does not refer to the state of dreams or unreality, but rather to a state of a reality beyond the mundane. The Dreaming focuses on the activities and epic deeds of the supernatural beings and creator ancestors who in both human and non-human form, traveled across the unshaped world, creating everything in it and laying down the laws of social and religious behavior.

The continent of Australia is covered by an intricate web of Dreamings. Some relate to a particular place or region and belong to those who reside there, other Dreamings travel over vast distances and connect those whose lands they cover. Thus people may be connected to several Dreamings and under Aboriginal law are only permitted to portray the stories to which, through birthright, he or she is entitled. To do otherwise is a serious and punishable offence. Within this confine, the styles and imagery or work vary widely, and increasingly so as new forms arise.

While the work may look abstract, it is in fact laden with meaning and symbolism. Most of the work can be displayed in either orientation, as the symbols are conceived from a birds eye perspective. The intricate details and repetitive dot work make the pieces visually compelling, and the stories behind them keep you engaged. Each piece in our collection was hand-picked from an artist collective in Sydney that is a member of the Indigenous Art Code which ensures fair and ethical trade with Aboriginal artists. Each piece accompanied by the artists bio and certificate of authenticity.